The KENTUCKY DERBY is celebrating its 140th anniversary this Saturday, May 3rd.

Traditions at Churchill Downs will remain the same, and the usual sightings will be present: the garland of roses, the twin spires, “My Old Kentucky Home” being sung, Mint Juleps and, of course, Derby fashion.

From fascinators and “Southern Belle” inspired hats, to sundresses, neckties and khaki suits, the occasion is seemingly as much about the attire as it as about the competition occurring on the track. This isn’t a new phenomenon though, as it appears to date back to the Derby’s origin in 1975 when Colonel M. Lewis Clark Jr., (the founding father of the Kentucky Derby), decided to emulate European races, which married comfort and luxury.

“For a well-to-do late 19th and early 20th century woman, a day at Churchill Downs, especially on Derby Day was an opportunity to be seen in the latest of fashions.”

In honour of the occasion — mostly because I’ve been to Kentucky — I popped into Goorin Bros. in Yaletown (1188 Hamilton St) to customize my Derby hat. Having never been inside the shop, when I first entered I was unsurprisingly overwhelmed. Hats for men, hats for women, even hats for children. If you asked them to, I’m sure they’d make hats for dogs. It is Yaletown, after all. 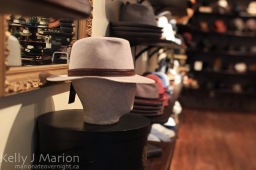 Between cultural artifacts and quirky signs, a variety of hat styles paint the walls: Bowlers, Cloche, Floppy hats, Fedoras, Gatsby style hats, Panamas and Fascinators. How does one choose?

Do I want to be flashy? Or keep it simple?
Should I go for a feminine or funky look?
Wide brim or short brim?
Feathers, brooches, ribbons, pins, or flowers? Or everything?

I don’t consider myself a “hat person”, and I expressed that to shopkeeper Amelia upon entering. Sensing my apprehension and witnessing my “hat novice” behaviour, she measured my head, before taking me on a journey through the different styles. Indecisive as I am, I obligingly started trying on the hats that she was handing me. It turns out that hats actually look pretty good on me!

After humming and hawing between two styles, one floppy, one funky, I opted for the latter. Then, it was time to “Derbify” it through customization. With the shop’s broad selection of accessories, I was again overwhelmed. I started grabbing items from the table and handing them to Amelia to see what she could come up with, while secretly reading her facial expression to see if she thought I was being ridiculous. Apparently, there’s no such thing when customizing hats. In fact, sometimes the more ridiculous the better!

I didn’t go wild and I don’t think my hat reflects exactly who I am, but it certainly has some Derby flair. (Most people buy a dress and create a hat to match their outfit, however, I did it in reverse and will be buying a dress to match my hat.) 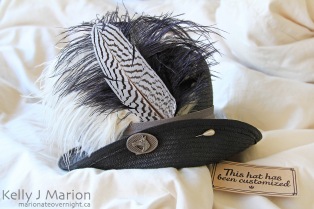 While Vancouverites are more about the Deighton Cup in August than they are about the Kentucky Derby, there is no denying that the opportunity to don fancy attire at a party will be seized. Especially if it’s the place to see and be seen.

I haven’t found a ton of Derby events happening around Vancouver, but as I was in the shop customizing my hat, I was told that Goorin Bros. is hosting a party! From 7-10pm the space will transform into a Derby inspired party with live swing music, complimentary libations (Mint Juleps, perhaps?) and, of course, their Derby Collection on display.

For those who prefer to host than be hosted, the Kentucky Derby site offers a “Derby Party Planning Guide” that accommodates every budget. So, get fired up, pull out your best duds, make some party plans and check out the contenders. Based solely on names, I like Uncle Sigh, Big Bazinga, Dance with Fate, and Wicked Strong.

Did you know? Mario Gutierrez, a local jockey who was born in Mexico but who had been training at Hastings Race Course for many years, claimed the win at the 2012 Derby with his horse, “I’ll Have Another”.

WOMEN’S DERBY FASHION OVER THE YEARS