Richard Wolak is on a trend of challenging the chefs of Greater Vancouver.

His previous poutine challenge aligned with the then hot topic of poutine being our National food. His current challenges though were not spurred by group discussion and merely by an idea that probably came to him in his sleep. On the table now is the Pancake Challenge which wraps up on November 18th and the Burger Challenge which began Monday and runs until November 30th. 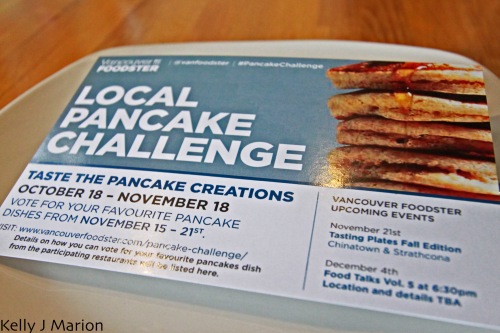 I love a good challenge and it seems that Vancouver’s chefs do too. Let’s face it though, it’s a challenge just to survive in the culinary world in this city with the top notch competition that exists. Regardless, many were eager to up the ante and partake in the Pancake Challenge.

In this particular challenge, creativity was key. Chefs were encouraged to dream up savoury and/or sweet pancakes and were given only one rule: each creation must have a minimum of three local ingredients in the dish. The chefs stepped up to the plate with an open mind and produced some very unique dishes.

I took part in the challenge too, but not in the kitchen; I went on a little tour with Richard Wolak to taste a few of the creations alongside Cassandra Anderton of Good Life Van, Louisa Chan of Ming Pao Daily, Thor Diakow from Breakfast Television, Stephanie Yuen, Writer/Publisher, and Alyssa Dawson from Novus.

Fishworks is a restaurant proud to be on the West Coast shown through their utilization of our bountiful, fresh seafood. Their menu boasts a variety of ocean delights but I’ll bet you’ve never had a seafood pancake before.

I was a bit skeptical at the idea of having shellfish in my pancake but was pleasantly surprised when I dug in. The texture was odd, mushy because of the moisture from the seafood and the abundance of chunks that were in it which made it hard to share in this case. I recommend squeezing some of the lemon on it rather than letting it sit as a garnish; seafood always tastes better with a little citrus. Also be sure to add the soy sauce “syrup” as the saltiness from it brings out all of the flavours of the dish. As far as creativity and culinary prowess goes, this one is high on the list.

This is Bob’s second location and it has a very different vibe from the Main Street restaurant. The rainbowed walls are as vibrant and unique as the dishes that they serve, especially when Bob is thrown in to a creative challenge. This man loves to compete and create!

Created by: Owner Tai Keattivanichvily with help in preparation from Executive Chef, Parichat Poomkajorn (shown below).

What they offered us on the tour was half of the regular portion of this dish. After noticing that we gobbled them up in 30 seconds, practically licking the place clean, they gladly gave us more. These “pancakes” are crisp and filled with a thin layer of ground chicken that is not prominent but tasted most on the pieces without mayo. The combination of ingredients is delightful and will probably be in the running for the win. And it’s gluten-free! It won’t fill you up but works perfectly as an appetizer or a snack. Expect to get a little messy with this one as they aren’t fork-friendly and are best eaten with your hands.

Popular for their delicious Intelligentsia coffee and their hearty brunch and lunch, Catch 122 showcased their passion for using local food in their triple-stack flap jacques.

Created by: Rachel Whiting and Chris Hogan (shown below)

This was the perfect finish to the tour with its sweet cake batter and the rich dollop of pumpkin cream cheese on top. My recommendation is to combine all of the elements in to one bite so that you get the moisture from the plums, the texture and crunch from the walnuts and the “in-your-face” flavour of the cream cheese. After all, how can you have a carrot cake without the cream cheese icing?

Voting: The public is invited to try these pancake creations at the participating restaurants keeping in mind this criteria – originality, creativity, uniqueness, traditional, non-traditional, price, value and most importantly taste.

Results of this challenge will be published on Vancouver Foodster’s site on November 22 and the 1st, 2nd and 3rd place winners will be awarded.

For more photos check out my Pancake Challenge set on Flickr.

Have photos you want to share? I’d love to see them, shoot me an email: kelly@thevancouverobserver.com or include a link to them in them comments.